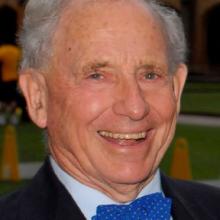 from International Institute For Self-governane

Introduced to Australia in 1965 modern financial analysis as author of "The management of Capital". Initiated in 1971 and co-authored in 1975 the first educational qualification for company directors in the world. Ph.D research established a methodology for grounding social science in the natuarl sciences to establish the science of governance and so also a science of corporate governance. Designed and co-presented the first course in the world to educate governance architects as an MBA unit at Macquarie University. Also visting lecturer for graduate students at the University of NSW, Sydney University and MIT. Prolific author on using biominicry to reform the theories and practices of capitalism by explaining how to political introduce ecological property and control rights to land, buildings, enterprises and money. Formerly a serial entrepreneur who founded a number enterprise that inclued two public mutual funds and three firms that became publicly traded. Founding member 1966 to 1974 or a private equity syndicate that acquired control and re-organised eight listed corporations. Author of 1975 book on 'Democratising the wealth of nations"; 2017 journal articles on Democratising the wealth of cities: Self-financing urban development, and Terminating currencies for distressed economies. Author of the first economic analysis of Aboriginal Communities published as Parliamentary Papers 135 & 438 of 1978.