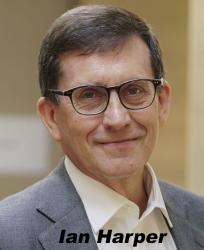 The late Ted Evans, like many of his generation, understood innately that economic policy-making affects people’s lives in more fundamental ways than numbers can ever capture. It is therefore incumbent upon economists when formulating public policy advice to remain open to the human dimensions of what can otherwise become abstract and clinical calculations.

In this lecture, Ian Harper will draw on his extensive policy experience in financial regulation, wages policy, competition policy and, most recently, monetary policy during the pandemic to discuss the ways in which his own approach to good economic policy-making has been shaped by Ted’s example in keeping one eye on how the policy advice translates into the lives of ordinary people.

In May 2016 he was appointed to the board of the Reserve Bank of Australia and became a Senior Advisor to Deloitte Access Economics, having previously been a partner with the firm.

Prior to his consulting career, Ian spent 20 years at the University of Melbourne, including 16 years in various roles at the Melbourne Business School.

From 2005 to 2009, he served as inaugural Chair of the Australian Fair Pay Commission and was a member of the 1996 Wallis Inquiry which recommended the establishment of the existing financial system regulatory structure for Australia.

Ian holds a PhD and MEc from the Australian National University and BEc (Hons, 1st class) from the University of Qld.

About the lecture series

The Economic Society of Australia (Qld) in conjunction with the University of Queensland, Queensland University of Technology and Griffith University has established an annual Ted Evans Public Policy lecture, with the inaugural lecture in 2017 delivered by Ted Evans, AC, former Secretary to the Treasury from 1993 to 2001 and Chair of Westpac from 2007 to 2011.

Ted Evans, who passed away in April this year, was one of Australia’s greatest public servants, and this named lecture is a recognition of his significant contributions to the development and implementation of effective economic policy.

REGISTER NOW VIA THE QUEENSLAND BRANCH