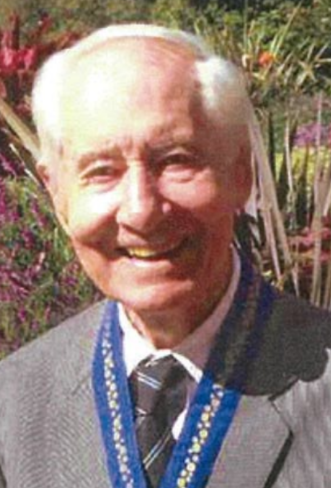 Murray was born in Melbourne in 1926 but, due to a clerical error, he did not officially exist until two months after his actual birthday. He was raised in rural Victoria before being sent to Wesley College and wining the Draper Scholarship in Year 12.  Murray became a dux of the college and his younger brother, Donald, achieved the same feat a decade later.  Murray completed a double major, an economics degree (first class honours) and an arts degree, at University of Melbourne (the same Economics Department that later produced Max Corden and Geoff Harcourt).  After completing his master’s degree in economics, he almost accepted a job with the Australian Treasury but eventually took the advice of his supervisor, Ben Higgins, to accept a doctoral scholarship from Johns Hopkins.

After several months on a cargo ship from Sydney, Murray arrived at the US East Coast in 1949 via the Panama Canal and the West Indies.  At Johns Hopkins, he soon joined an outstanding cohort, which included Merton Miller (Nobel prize winner in 1990), Edith Penrose, Robert Eisner and John Chipman.  After completing two years of coursework at Johns Hopkins, Kemp took up an offer of employment from his former mentor, Higgins, who was by then Chairman of the Department of Economics at McGill.  His doctoral thesis on trade theory, supervised by Evsey Domar, was completed in 1955.

While working as Nuffield postdoctoral fellow at Cambridge in 1956-57, Murray met Thérèse Belleau, a French-Canadian anthropologist, in London.  Fate reunited them later when Thérèse took up a teaching position at the University of Montreal.  They got married in 1959 and, soon after, he was head hunted by David Rowan, then Head of the School of Economics at UNSW, for the second chair in the school.  But by that time, Murray had already agreed with Domar, now at MIT, to teach there for at least two years.  The decisive influence at MIT was his exposure to Paul Samuelson’s research, especially Samuelson’s pioneering work in the gains from trade, which inspired Murray to write at MIT the first of his many papers on the gains from trade.  Murray was also  asked by Charles Kindleberger to take over his graduate course in international trade.  Murray’s own notes for this course later became his famous 1964 textbook.

Murray returned to Australia in 1961 and immediately became Head of the School of Economics at UNSW.  He was at times Chairman of the Faculty of Commerce, Chairman of the Faculty of Arts and acting Dean of Commerce.  Unhappy with his administrative burden, Murray contemplated taking a position in the Research School at ANU.  In 1963, to prevent Murray from leaving UNSW, the then Vice Chancellor, Philip Baxter (later Sir Philip), made him a Research Professor, a unique position in the history of UNSW until the early 2000s.  Although he was once seriously tempted by an offer from University of California at Berkeley, Murray stayed at UNSW until 2001.  After his ‘compulsory’ retirement in 1991, he remained in the School of Economics for another decade and later in the Australian Graduate School of Management of UNSW for three more years.  His last academic appointment was Visiting Research Professor at Macquarie University from 2004 to the end of 2007.

Murray was Australia’s pre-eminent academic economist, internationally recognised for his contributions to knowledge on international trade, welfare economics and exhaustible resources.  He was a prolific neoclassical, general-equilibrium theorist, having authored/co-authored 20 books and over 300 journal articles and book chapters,  including publications in every leading economics journal – Econometrica,  American Economic Review, Journal of Political Economy, Quarterly Journal of Economics, Review of Economic Studies, Journal of International Economics and International Economic Review.  A major focus of Murray research was on analysing the gains from trade between nations in goods and investment when the economies have very  general characteristics. This major contribution to basic normative trade theory includes the famous Kemp–Wan theorem that demonstrates the potential optimality of regional piece-wise trade reform. Murray’s research has been very highly cited – No other Australian economist has been more cited in the period since 1980.  He remained intellectually active long after his retirement and published 11 journal articles and 13 book chapters from 2008 to 2018.  His final research interest was the gains from trade under the assumption that consumption takes time.

Murray wrote the classic text, The Pure Theory of International Trade and Investment, that was used around the world in advanced undergraduate and graduate classes for over two decades.  Through this book, he was often credited with being responsible for the formalisation of the trade curriculum.  His book has also become an indispensable reference in all subsequent textbooks in trade theory.

Murray was well-known as a dedicated and inspiring supervisor, having supervised and done joint research with a very large number of students, many of whom travelled from Asia to work with him.  He supervised the very first doctoral graduate in School of Economics at UNSW and, until 2001, produced more PhD graduates than any other academics in the School.  He was a formidable supervisor as he expected rigor and would not accept anything just to please.  His doctoral students were impressed by his virtues of “knowledge of the subject”, “clarity of exposition”, “warm guidance and encouragement”, “constructive and insightful comments and suggestions”, “timely responses to students’ work”, and “patience and thoroughness.”

Outside academia, Murray excelled in sports, particularly tennis and cricket, and was well read.  He was respected as a fine gentleman who always played a straight bat, and described as being warm, kind, thoughtful and generous to friends, colleagues and students alike.  His former students also noticed his disposition, broadmindedness, and devotion to his wife and children.

Murray is survived by his children (Fenn and Nadia), his children in law (Laura and Dominic) and four grandchildren (Madeline, Daniel, Darcy and Harry).  He is predeceased by his wife (Thérèse) and younger brother (Dr Donald Kemp).  A memorial service will be held once the Sydney lockdown has been eased.