In recent years, encouraging female labour force participation has often been on the policy reform agenda, either for: equity reasons, to reduce income support dependence, or to counteract declining population participation rates due to an ageing population.

It is clear that over the past few decades, female participation in the labour market has increased dramatically, and this appears to be still continuing. The figure below shows that the labour force participation rate and the employment to population ratio of mothers of preschool children has increased by around 7 percentage points over the past decade (from respectively, 53% and 50% in 2006-07 to 60% and 57% in 2016/17). For mothers of older children a more modest increase of around 2 percentage points can be observed (around the 75% mark), which indicates that this group may be close to the maximum participation level. 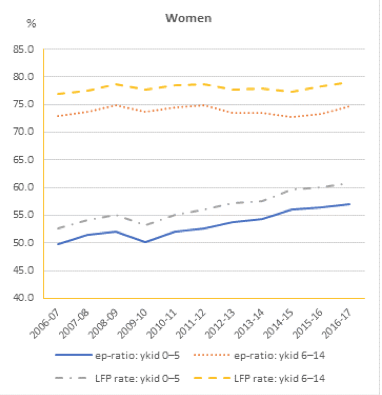 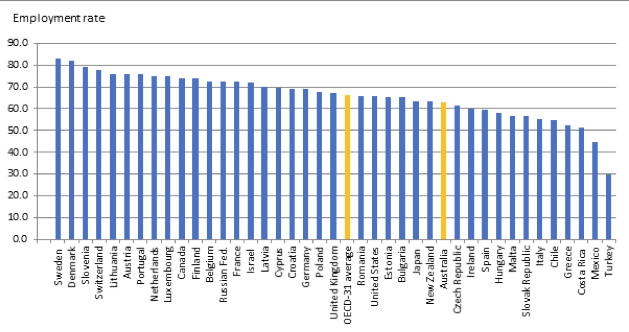 Figure 3 Labor market connections for married/cohabiting men and women, aged 20 to 45, by age of the youngest child 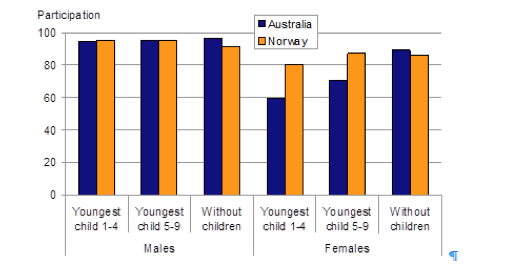 Sources: Kalb and Thoresen (2010); Authors’ calculations using the Survey of Income and Housing Costs 2003/2004 for Australia and the Labour Force Survey 2005 for Norway.

In this poll, we sought the views of the National Economic Panellists on the inevitability of this decline of women’s employment in motherhood, and on the opportunities for men to take on a caring role while employed.

The two propositions to be considered were:

Proposition (2): "Fathers are more restricted than mothers in fulfilling a caring role while in employment."

A majority of panellists (70.6%) agreed with the first proposition, and of the 17.7% (three respondents, all women) who did not agree, one (Janine Dixon) did not agree due to the strong wording of the proposition. Stating that women will “always” be negatively affected is clearly not true, since there is evidence to the contrary. John Quiggin, one of the agreeing respondents, also makes this point that there are exceptions. Amongst the two “uncertain” responses to proposition 1, Tony Makin also acknowledges that the proposition is probably generally true, but suggests that the statement does not need to hold if the father would be the principal carer. This brings us to the second proposition which divided the panellists to a larger extent than the first proposition, although a small majority of 53% still agreed.

Part of the division in opinions on the second proposition seemed to have been caused by the vaguer nature of the proposition, which made it more difficult to clearly agree or disagree with this statement (two of the three uncertain responders were uncertain how to interpret this proposition).

Several of the responding panellists have added extensive comments to their responses to the two propositions, in which suggestions for policy changes are provided. Two panellists (Lisa Cameron and Janine Dixon) suggest a Swedish-style paternity leave to encourage fathers to participate more of the caring, and change cultural/societal norms around fathers’ caring role, as well as reset expectations within the family. Lisa acknowledges that social norms (and current public policy) may make it difficult for men to negotiate work arrangements that will facilitate an increased caring role. However, she argues that that should not prevent men from trying to push for change in this regard. Ultimately, this could be a win-win situation, as in her case where both she and her husband work part time and are the happier for it. Similarly, Lata Gangadharan and Lionel Page mention the lack of (generous) paternity leave and a lack of respect for the caring role of men, due to existing social norms, as a hindrance to men fulfilling a caring role. Beth Webster also mentions the current lack of respect for men taking time out of their careers to care for young children or others. She remarks that being the type of men who is 100% focussed on their career is not healthy for these men nor their families, again hinting to the possibility for a win-win situation when sharing more equally.

Cultural expectations are a factor also mentioned by Margaret Novak, who suggests that the male “breadwinner” model (also mentioned by Prue Kerr) may have a lot to answer for in influencing the current actions of fathers, mothers, employers and governments. These cultural expectations may lead to statistical discrimination where the expectation of motherhood is enough to reduce wages, access to training/mentoring and job opportunities. It may also lead to guilt for working mothers, who may continue to feel they have the primary responsibility for the care for their children (more so than their husbands/partners). Furthermore, cultural expectations may also create hurdles for employed men to take on caring roles as employment is not structured to enable men to do this anymore than women.

Lionel Page points out the required work interruption due to the physical demands of motherhood which imposes different parenthood effects on women than on men. These interruptions can have long-term impacts reinforced by a stronger focus on family in the work-life balancing act for women post birth. Lionel proposes policies that reduce the penalty arising from this interruption: e.g. ensuring a lower penalty for exiting and re-entering the labour market by providing re-entry subsidies to employers who hire women after a career interruption, allowing performance to be assessed relative to opportunity, i.e. taking into account career breaks due to parenthood.

Gigi Foster, who disagrees with both propositions, argues that couples can organise their work around having a family in many different ways, and it is up to them to decide how to do this. However, she agrees that there could be better support for families trying to combine having children and work, with the availability of childcare that aligns with the needs of working parents mentioned in particular. Lionel Page mentions the specific constraints faced by women desiring to return to the labour force soon after birth, due to a lack of childcare places.

Janine Dixon focusses on the financial hurdles, suggesting that the design of childcare subsidies and high effective marginal tax rates for the secondary earner make it difficult for this group to participate in the labour force.

Despite the progress that has been made in workplace practices such as providing parental and not just maternal leave, and flexible work arrangements, Prue Kerr is of the view that a more forceful approach may be required. She suggests that rules of conduct to complement incentives may be needed to address the large gender differences in terms of career outcomes. Lionel Page on the other hand suggests the exact opposite: providing incentives to businesses to give more opportunities to women rather than trying to implement stricter regulations.

The comments by our responding panellists provide a range of options for policy improvements. Not surprisingly, parental leave (and particularly setting aside time for the father) and childcare are mentioned. In addition policies to encourage (or “force”) employers to take on women after career breaks without the large penalties that are currently often applied. Finally, the current unfavourable marginal effective tax rates for secondary earners are highlighted, where policies may be developed to reduce these disincentives for (mostly) mothers to participate. Julie Toth observes that important policy areas, practice and attitudes are still strongly gendered, which could possibly encourage different outcomes for men and women. This hints at the importance to make family-friendly policies equally available to fathers and mothers.

[1] The reason for omitting children under the age of one is that many Norwegian women take a full year of (paid) parental leave. However, most of these women return once their child turns one.