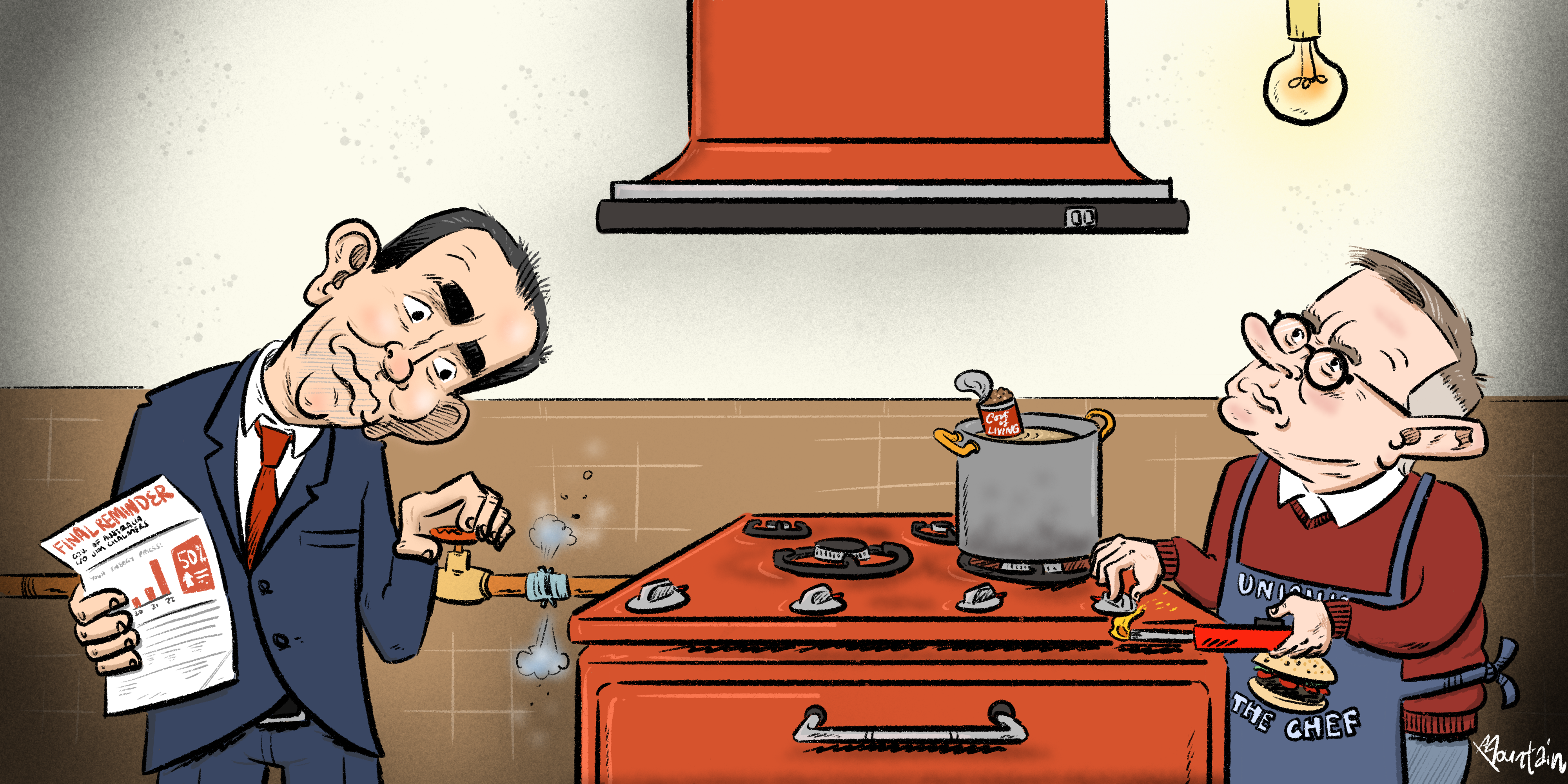 Australia’s top economists have overwhelmingly endorsed intervention to restrain gas and electricity prices, with only three of the 47 leading economists surveyed believing the best thing the government can do is to leave things to the market.

The 47 economists surveyed are members of a panel selected by a committee of the Economic Society of Australia for its expertise in fields including public policy and economic modelling. Among its members are former Reserve Bank, Treasury and OECD officials, and a former member of the Reserve Bank board.

Told that Treasurer Jim Chalmers is examining options that until recently would have “not have seemed palatable” in the wake of forecast retail electricity and gas price increases of 56% and 44% over the next two years, the panel was presented with a list of options and asked to choose the most valuable.

Only three ticked the option titled “government should not intervene”.

Two-thirds of those surveyed picked options that would cap domestic gas prices, use an extra tax on the profits of gas exporters to subsidise energy prices, or reserve gas that would otherwise be exported for domestic use.

Gas prices feed into electricity prices because gas generators are usually the last to be turned on after cheaper options have been exhausted, meaning they determine the price for which extra wholesale electricity is sold.

The measure that attracted the most support (13 out of the 47 economists) was increasing the tax of the “resource rents” enjoyed by gas producers, and using proceeds to cut electricity and gas prices.

Resource rents are the excess profits earned from the sale of resources that flow from the sellers’ exclusive access to the resource.

Australian gas producers already face a special resource rent tax, but weaknesses in its design mean that, even at the present unprecedentedly-high gas prices, it is expected to bring in just A$2.6 billion in 2022-23, falling to $2 billion by 2025-26.

Read more: Australia already has a UK-style windfall profits tax on gas – but we'll give away tens of billions of dollars unless we fix it soon

Innovation expert Beth Webster from Swinburne said the windfall gains to gas exporters flowing from Russia’s invasion of Ukraine should not go to shareholders, many of whom were foreign, but to national priorities such as price relief for Australians on low incomes.

Independent economist Rana Roy said while energy prices had traditionally been too low to cover the society-wide costs of producing the energy, at the moment prices were, in many instances, “well above” the social cost.

Six of the 13 economists who backed an increased resource rent tax wanted the proceeds directed to assisting lower-income energy consumers before others.

Another six wanted targeted subsidies for low-income consumers even if they weren’t funded by increased resource rent taxes.

Offered the option of picking a measure not on the list, two of the 47 picked “unrestricted cash transfers”. They made the point that lower retail prices would have the unhelpful side effect of encouraging the continued use of gas, whereas cash payments would enable consumers to cut their use of gas while banking the cash.

Eleven of those surveyed wanted the government to reserve gas equivalent to 15% of each eastern state liquefied natural gas (LNG) export project for use in Australia, as happens in Western Australia.

Former senior Organization for Economic Co-operation and Development official Adrian Blundell-Wignall said the requirement seemed to be “tried and tested” and was the best of a list of uncomfortable choices.

Curtin University economist Harry Bloch said while reserving 15% of the output of LNG projects would change the conditions under which they were licensed, the operators applied for the licences at a time when expected prices were lower.

Read more: Cheaper gas and electricity are within our grasp – here's what to do

Ken Clements of the University of Western Australia strongly disagreed, saying Western Australia’s 15% reservation policy should be scrapped. It operated as an export tax and shielded West Australians from the high prices needed to encourage conservation and look after the environment.

Curtin University’s Margaret Nowak said it was “too late” to hit the the eastern state exporters with licence restrictions after the licences had been granted.

The best that could be done was to ask the eastern state exporters to supply more gas to Australians, as the government has done, and to impose a price cap on those sales that was closer to the pre-invasion price than to the present international price.

Six of the 47 economists supported a cap on the price at which producers can sell what they have already agreed to supply domestically, even though several would normally “be hesitant to promote this type of intervention”.

So long as regulators picked a reasonable benchmark for the price cap, such as the pre-invasion price, producers would continue to earn healthy returns.

Two of the economists surveyed nominated an item not on the list – encouraging the development of gas fields to boost supply – that would be unlikely to have an immediate impact on prices.

Of the three who picked “government should not intervene” one (Gigi Foster) said measures to restrain prices would get in the way of “basic economics”, which required consumers to cut back on their use of energy as prices rose.

Another (John Freebairn) said he nevertheless supported a higher resource rent tax to increase the government’s share of the above-normal profits generated by corporations granted licences to mine Australian-owned deposits.

Treasurer Chalmers said on Thursday he expected to produce a costed plan for restraining energy prices by Christmas.